Remote work is the future of work.

You might have arrived at this conclusion by your own volition. Or you might have reached it because of current circumstances.

But in a time of global uncertainty and widespread travel restrictions, it’s clear that remote work is the only lifeline that can keep your business afloat.

While there are a ton of challenges with remote work, perhaps the toughest is team building. How do you build camaraderie in a group when people can’t even share the same space? What can you do to make new employees feel included?

Although nothing can truly replace real-world, face-to-face interaction, some of these remote team building activities we’ll share below will help you build better teams.

What Makes a Successful Remote Team?

Most of you reading this have at least some experience of working in a great team.

It’s tough to describe it, but successful teams usually have a certain spark and energy. The team members somehow seem to gel together. The communication is fast-paced and energetic. There is enthusiasm about the work. And there is a real sense of camaraderie.

Remote teams aren’t any different. Great remote teams have the same cadences as their real-world counterparts. They might not share a physical space, but that doesn’t mean that their energy or camaraderie is any different.

Extrapolating from the abundance of research on traditional team building, we can say that successful remote teams have a few things in common:

Any remote team building exercise, thus, must attempt to bolster these characteristics.

But does this mean you have to lock people together in a chat room and nurdle them to talk periodically?

As another study concluded,

“Strong relationships and trust do matter to collaboration, but they are not the starting point. They are the outcomes of dedicated people striving together.”

That is, instead of simply pushing people to talk more openly, you have to find their common purpose. Let them discover how they want to achieve their given objective. If you provide an environment where they can communicate and collaborate freely - helped by remote team building activities - they will eventually form strong team builds.

And that’s pretty much the secret to building successful remote teams: nurture their shared sense of purpose and foster better communication through remote team building activities.

On that note, let’s discover some virtual team building activities you can use right away.

When we talked about team building activities in the past, we covered games of skill, chance, and teamwork.

Some of these required entire fields and tons of equipment.

But what can you truly accomplish when you’re limited to a video camera, a microphone, and some chat software?

One of the biggest challenges with remote work is battling the sense of “presence” a physical office gives you. It’s one thing jumping onto a conference call and another to bump into someone casually at the water fountain.

This activity - or rather, way of working - seeks to solve this lack of presence. Essentially, it involves creating a live feed of the entire team that keeps running perpetually through the workday.

Although it’s not exactly an activity, this live feed can go a long way in bridging the lack of togetherness remote teams usually encounter. You don’t even have to do anything - simply working while you know what others are doing can create a sense of togetherness.

You don’t have to do it every day, of course. A once-a-week work session can be enough to help build camaraderie.

There is no better way to build camaraderie than to sit around a campfire in the wilderness, toast some smores, and share old stories.

But as a virtual team, you can’t really do that.

While you can’t recreate the fire or the wilderness, you can recreate the stories and the smores. A “virtual” campfire would be outside office hours (of course) and would have the same structure as any camp night.

The structure is pretty much open ended, but some ways to go about it include:

There are even companies specializing in virtual campfires such as this.

The daily standup is a staple of teams. But in a virtual setting, asking people to report what they’re working on over email can be a bit boring.

Instead, try hosting your daily standups over everyone’s morning cup of coffee or tea.

This helps in multiple ways:

Again, this doesn’t have to be a scheduled activity - simply make it a part of your routine. You’re going to run standups anyway; why not make them more fun?

The easiest virtual team building activity - something that most remote teams already do - is to host an online hangout.

A slew of new tools is turning these into full-fledged interactive experiences, not just a bunch of video feeds.

For example, Kosmi lets you create a virtual room where you can play poker, classic NES and SNES games, and host video chats, all on the same platform.

This goes beyond gaming (which can often exclude non-gamers) and adds much-needed interactivity to otherwise boring virtual hangouts.

As I wrote above, one of the hallmarks of successful teams is that team members carry on side-channel conversations with each other of their own volition.

For such direct communication to happen, team members must know each other. This can be difficult in a virtual setting where you can’t bump into a colleague at the water cooler or cafeteria.

The larger and more distributed the team is, the tougher it is to know the people you’re working with daily.

Fix this problem by hosting “member quizzes”. Think of this as a friendly “date” where you pair two team members together and give them prompts. These prompts are designed to help them know each other better.

There are plenty of tools to make this process easier. QuizBreaker, for instance, pairs up two people and asks them fun questions as icebreakers. Donut, on the other hand, simply pairs two people together and sets them up in a virtual meeting. 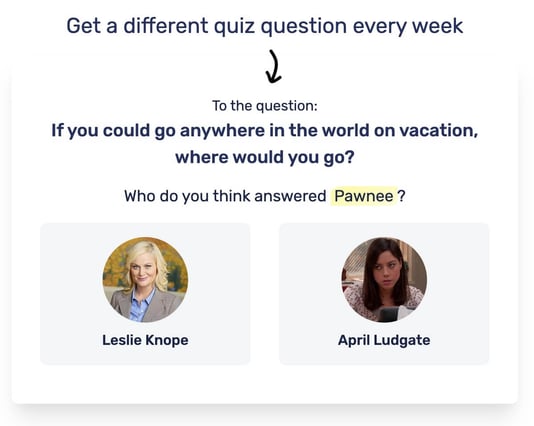 Tools like Quizbreaker can help team members get to know each other in a fun, casual way

This can be a powerful tool for managing large teams where team members have never had a chance to physically meet each other.

This virtual team building activity is just like that, except instead of rappers and mansions, you have colleagues and offices.

Ask team members to host virtual tours of their offices. Give them freedom to be as corny or funny as they want to be (remember that this is ‘MTV Cribs’). Ask them to talk about anything that’s particularly important to them, say, a book they love or a gadget they can’t do without.

You get to learn a lot about someone from their working environment. In physical offices, people decorate their desks. In virtual environments, you can get the same sort of understanding through an office tour.

Bonus: At the end of the tour, ask everyone to share pictures of their offices with the team leader. After a week, share a picture of an office with the team. Ask team members to name who the office belongs to. Also ask them to name if they see anything special in the pic (such as a book the original office owner talked about).

This is a great way to ingratiate new members into a team.

We all know the classic game, Pictionary. For those unfamiliar, the game involves dividing a group into two or more teams. A member from each team draws a card and draws it on a piece of paper. The other team member has to guess the object from the drawing before time runs out.

Adapting this game to a virtual medium requires a few tweaks. One person (usually the team lead) will have to play the ‘dealer’ who picks out cards and shows it to each team member on their turn. The team member can then dry the card either digitally (say on MS Paint) or on a piece of paper/whiteboard with the camera pointed towards it.

If you have the equipment for it, you can even take the wholly digital route with VR games like DoodleVR.

This game recreates Pictionary, but in VR. If your team has VR headsets and controllers, this can be a great virtual team building exercise.

Its name might inspired by the Arnold movie, but trust me, you won’t have to hang from a jet fighter or chase terrorists.

Instead, this remote team building activity involves asking team members to share three truths and one lie about themselves.

Here’s how it works:

This can be a simple game to build camaraderie and get people to know each other.

Trivia games are very easy to play online and great fun. Just like real world trivia games, they’re great for promoting collaboration and getting people to work as teams.

This online version of pub trivia works the same way:

You can take things a step further by using tools like QuizShow to create more detailed quizzes that people can participate in on their mobiles (while still being on video).

Bonus: Make this event an after office hours special and ask them to bring in their favorite beverage for a real pub trivia feel.

This is another great after office hours game that works great as an icebreaker.

The process is simple:

This game works particularly well in teams of similarly aged people who would recognize tracks from the same period. Nostalgia is a powerful glue and can help people to relax around each other.

Managing a virtual team is tough work. While working from home can make some people productive, it can also impact collaboration and the natural cadence of communication. You might be able to fix these in a physical office, but in a virtual setting, breaking communication boundaries isn’t easy.

Following these virtual team building activities is a good way to break the ice and get people to know each other. Try these activities as a start and tweak things based on your results.

Another way to improve collaboration is by using better team management software, like Workamajig.

Click the link below and see how Workamajig can transform your business:

The Definitive Guide to Team Building 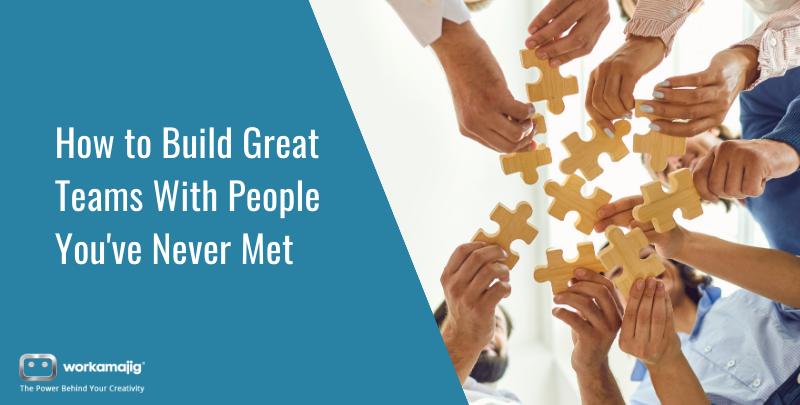 How to Build Great Teams With People You've Never Met