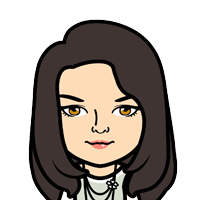 In case you haven’t noticed, the world is changing. Fast.

Blockchain tech was a mere glint in Satoshi’s eye in 2008. It is now the foundation of a market valued at over $500 billion.

A home assistant that plays your music, books an Uber, and orders food was the stuff of Star Trek. Today, Amazon Alexa sells millions of units every year.

From robotics to AI, it is clear that the tech world is evolving very quickly. If your agency is to thrive, it has to keep pace with these changes. ‘Cutting edge’ in 2009 meant being mobile-first. In 2019, it might very well mean being ‘VR/AI/Crypto-first’.

What are the tech trends your agency should look out for? What opportunities for your agency do these trends represent? How do you keep track of new developments?

I’ll answer these questions and more in this article.

In its annual roundup of the ten most important tech trends, Gartner categorized notable trends for 2018 into three buckets - ‘intelligent’, ‘digital’, and ‘mesh’. 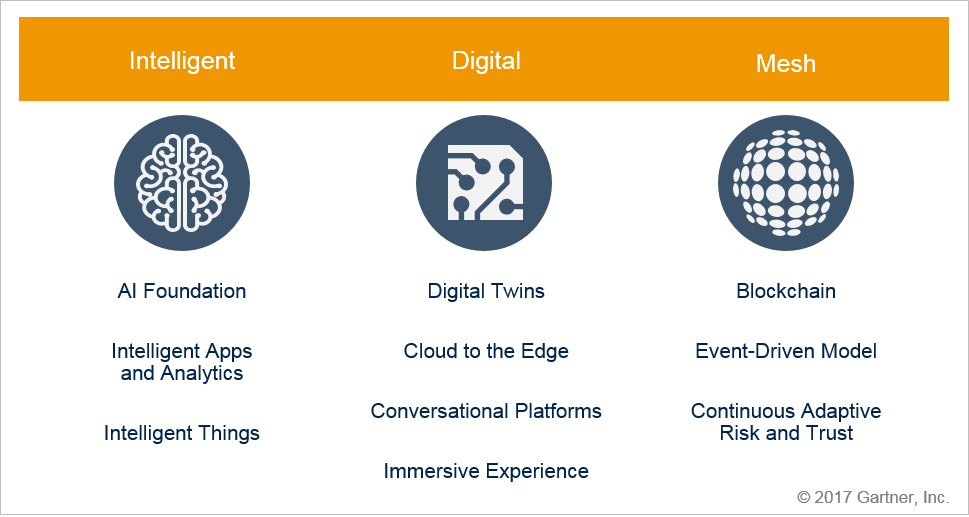 It’s a testament to the staying power of these trends that even in the fast-changing tech landscape, most of these trends found a place in Gartner’s 2017 report as well.

While some of these trends are only tangentially related to the agency business (such as ‘digital twins’), others have the potential to directly impact how your agency operates.

The most notable among these are:

In the next section, I’ll cover these trends in more detail.

Virtual Reality has been knocking on the doorstep of mainstream popularity for years now. The first wave of VR hype goes back to 1990s when new developments in 3D graphics promised to make virtual worlds come to life.

Of course, that hype was short lived as both the hardware and the software was woefully underpowered.

In fact, general interest in this technology was on a downward trend for years.

Luckey, the founder of Oculus Rift, launched a Kickstarter for the virtual reality headgear in 2012. The prototype set off a flurry of excitement in the tech and gaming community. None other than John Carmack, the maker of Quake jumped aboard.

That VR held real promise this time was further confirmed when Facebook bought Oculus for $2B just two years later.

AR followed a similar path of development. The technology, which places a digital interface over everyday objects (as opposed to placing you, the user, in a virtual landscape like in VR) was already accessible via smartphone cameras.

You can gauge the excitement around AR by the fact that MagicLeap, an AR company, raised $1.9B in funding without even a public demo of its product.

Overall investment in AR/VR businesses has shot up substantially in the last few years. 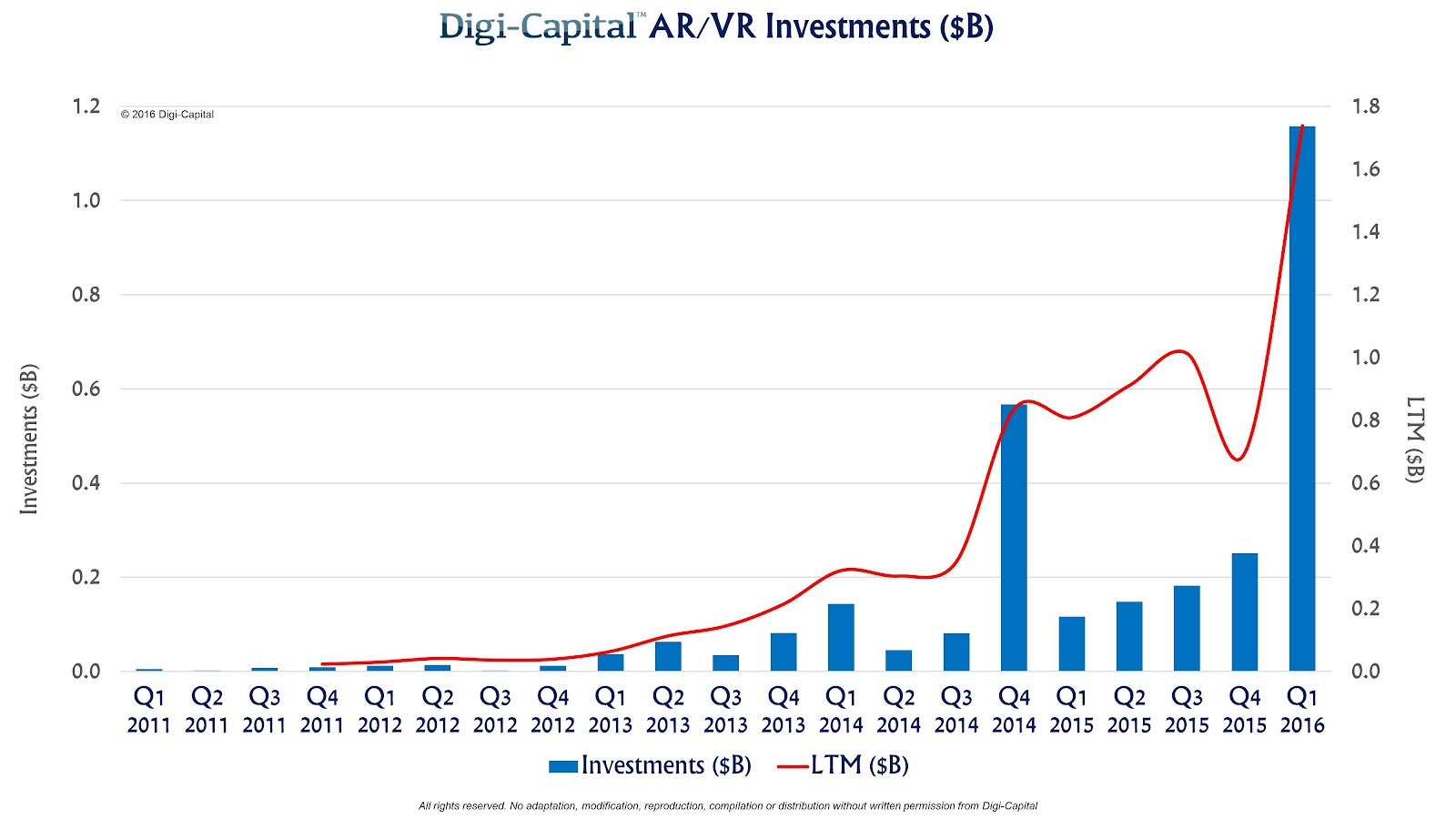 According to one survey, 67% of enterprise customers say that they’re willing to use AR in the workplace.

VR, on the other hand, is likely to find stronger adoption in entertainment. According to one estimate, VR will have a market value in excess of $11B in gaming. 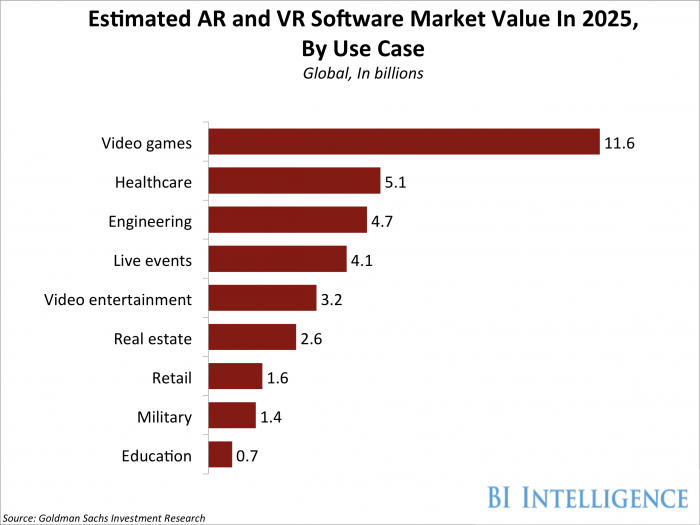 In many ways, AR/VR is a solution looking for a problem to solve. There are a number of use cases in industries as diverse as engineering and healthcare, as Deloitte points out. 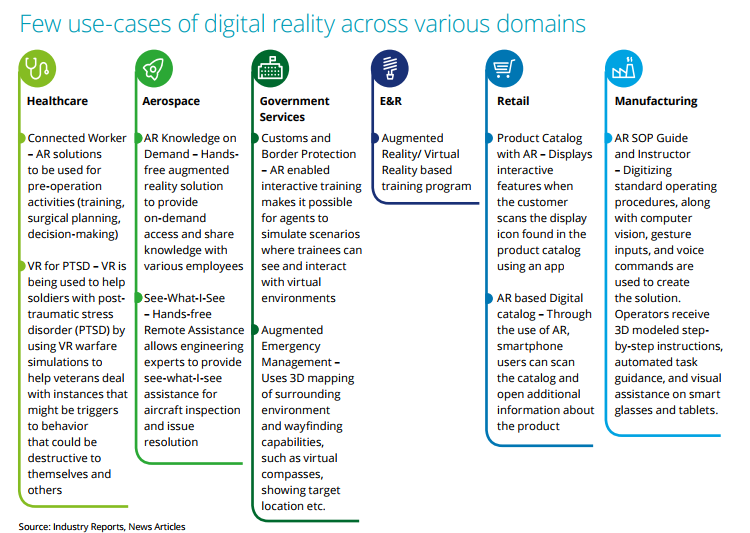 Smart deployment of these technologies can unlock massive value. Case in point: Niantic’s PokemonGo, which heavily uses AR, grossed $1.2B in revenue in just two years after launch.

As consumer brands and enterprise customers both adopt AR/VR, they’ll rely on agency partners for storytelling, design, and development.

This shift into ‘immersive’ content offers your agency a chance to adopt and own a completely new, and still maturing technology.

What does an agency need to adopt AR/VR?

AR/VR, more than most mediums, depend on immersive storytelling. Most visual experiences don’t translate well to AR/VR. You need people who understand good storytelling and the constraints of the technology.

Focus on the following skills:

We’ve been fascinated - and frightened - of artificial intelligence since the dawn of the idea in the computing age. Recall the menacing HAL from 2001 or the friendly C3P0 in Star Wars.

As a technology, artificial intelligence probably holds more promise than anything else on the horizon. A General AI with near human-level intelligence will likely unlock exponential increases in productivity.

We’re a long way from General AI, of course. What we do have at the moment is Narrow AI. This is AI designed to fulfill a narrow set of tasks - tell you the weather, play your favorite song, and tell you how tall Mount Everest is.

Total investment in AI has been on the rise for years now. In fact, 80% of enterprises are investing in AI today.

Within the enterprise, narrow AI finds use in analyzing large amounts of data, assisting in tasks to improve productivity, data preparation, etc.

AI is less a standalone technology and more of an “ingredient” that can be added to products across verticals.

AI can be deployed both for solving client problems and issues at your own agencies. Programmatic advertising, for instance, can help marketing managers at agencies be more productive (or perhaps even make them obsolete).

For clients, AI can unlock new ways to solve problems and offer highly personalized solutions. JWT Canada, for instance, used AI to change a digital ad creative on the fly based on customer preferences.

“[Targeting] specific markets is something that we’ve been able to do for decades..what’s different is using data signals (AI) in order to figure out if you’re talking to a traveler who is trying to go to Europe as opposed to someone who is traveling to Asia versus someone who has a family or is a single traveler.”

In fact, data analysis and personalization is one of the big uses of AI as far as agencies are concerned. Agencies can use AI to create thousands of variations of low-level collateral and personalized campaigns on the fly.

The result is higher productivity for you, better results for clients.

How you adopt AI will depend on what kind of AI services you want to offer.

Rudimentary AI, such as in a chatbot, is much easier to adopt than more advanced AI to parse large amounts of data.

As an agency, if you want to offer advanced AI as a part of your existing services, consider hiring a data science team with a background in statistics and computing.

When it first emerged in 2008, blockchain, in the form of Bitcoin, was a digital currency infrastructure. The promise of blockchain was that a distributed ledger eliminates the need for a central authority.

With the development of Ethereum (ETH), the idea behind the distributed ledger can find use across industries. Instead of centralized record-keeping of transactions, files, or actions, the ledger can be checked and verified by its constituents. Anyone who is a part of the ledger and has the same level of permission can access the same information at the same time.

As a technology, blockchain can find use across industries in businesses big and small. Investment has skyrocketed based on this premise - the crypto market (a colloquial term for blockchain and related technologies) appreciated 1,200% in 2017.

You can gauge the impact of this technology from the fact that Initial Coin Offerings - a fundraising instrument for blockchain-based solutions - raised $5B in funding in 2017. 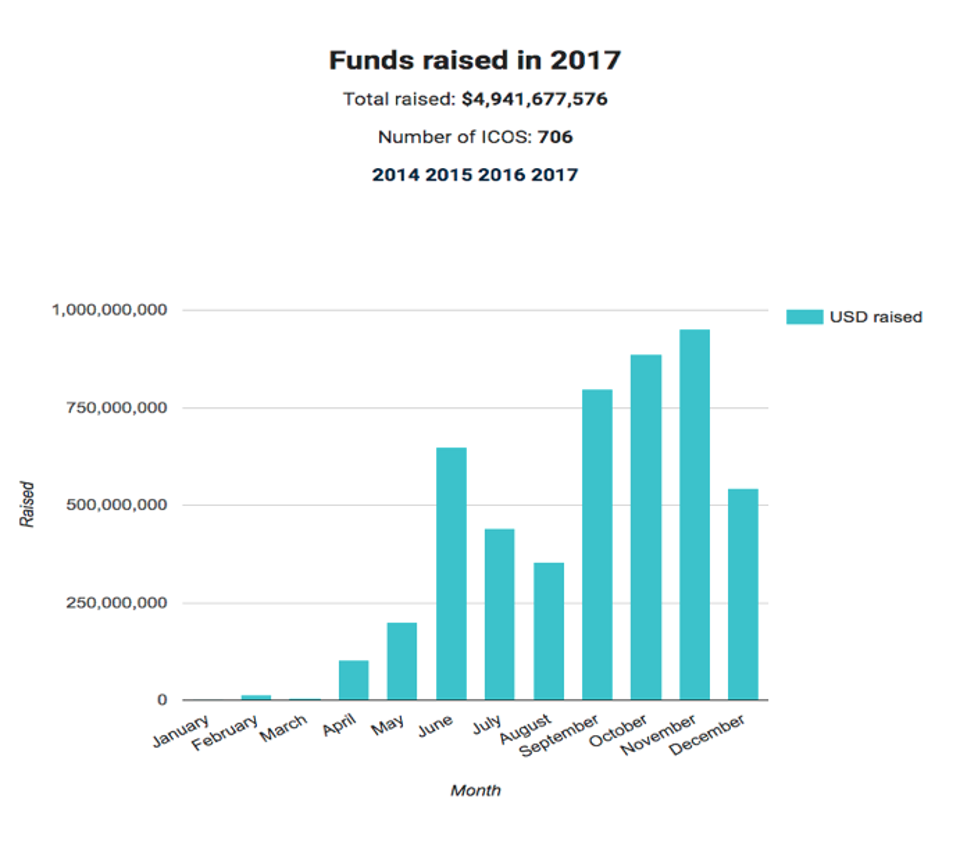 These ICOs covered nearly every industry you can imagine, though the majority of investment was localized in infrastructure, trading, finance, and payment businesses.

How Your Agency Can Benefit

The opportunities for using blockchain technology in your agency business aren't obvious - at least from a superficial viewing.

At its heart, blockchain is essentially the distribution of trust. In a blockchain driven world, there is no need for centralized ad exchanges since all transactions can be verified by the distributed ledger.

This opens up a number of opportunities for agencies:

Blockchain tech isn't completely ripe for agency adoption. A proactive stance, however, can ensure that your agency is ready when the technological issues have been sorted out. Be on the lookout for talent with blockchain experience.

Also keep an eye on blockchain trends and blogs.

Computing so far has relied largely on touch and sight as the two dominant interfaces. You press a button and watch something change on-screen.

There is a third computing interface that promises to change the way we use computing device: the human voice.

Better voice recognition powered by machine learning and faster processors have now made it possible to interact competently with computers using your voice alone.

Think of Siri, Google Now, or smart speakers such as Alexa. You don't have to touch Alexa, or watch it on a screen. You simply speak a command and Alexa translates the intent of your words into action.

Essentially, voice based computing is enables the development of 'conversational platforms'. Like Jarvis, you'll interact with these computers through conversations, not taps and clicks.

These conversations can be vocal, as in Amazon Alexa or Apple's Siri. Or they can be through text, such as chatbots.

In fact, Gartner estimates that by 2019, 20% of all interactions on a phone will be through voice assistants.

As these voice assistants integrate better with third-party services (such as Alexa's 'Skills'), they'll offer even more value. This makes the friction (which is already low) of using them worth it for the results, spurring further adoption.

The "conversation" age presents a new challenge for agencies - and new opportunities. Agencies will increasingly have to design not just for screens, but also for voice. This will impact everything from naming an app to creating content to be 'voice friendly'.

Some ways agencies can take advantage of conversation platforms are:

This is just the tip of the iceberg as far as conversation platforms go. In the near future, you'll have to consider not just how something looks and reads, but also how it sounds and responds to vocal instructions.

You likely already have the in-agency talent to offer voice-focused services to clients - content creators and developers. You might also want to hire voice actors on a freelance basis.

Your biggest priority, however, should be hiring designers with experience in creating vocal user interfaces (VUIs). Look for people with video game or multimedia experience.

Which of these technologies are you excited for? How are you changing your agency to keep pace with them?

Let us know in the comments below!

Esther, Workamajig’s current Marketing Manager, joined the team back in ‘14. She's a Jersey girl at heart with plenty of NY grit from her time across the river. Like most credentialed marketing gals, she’s always got a good cup of coffee and would love to hear from you at estherc@workamajig.com. 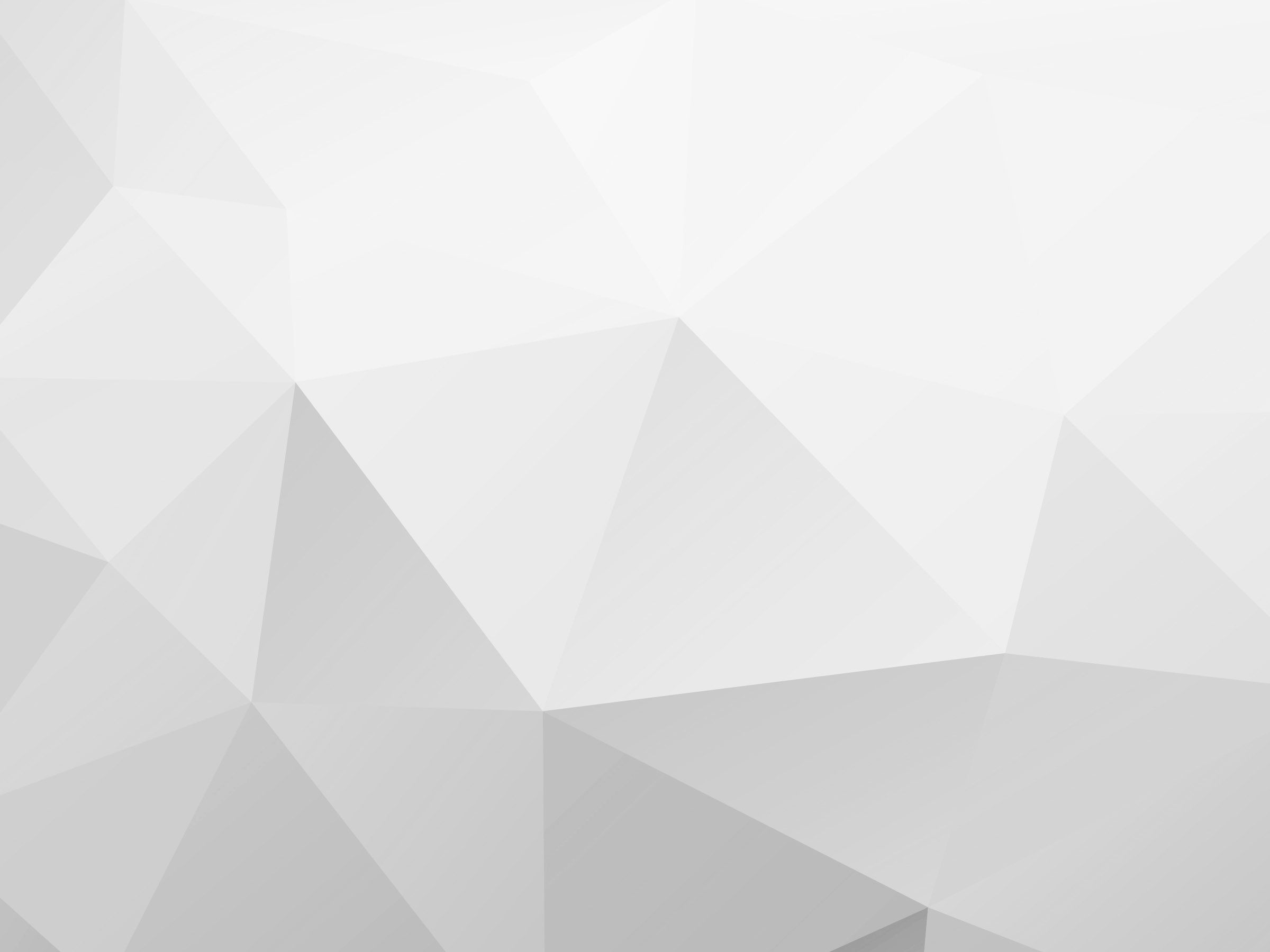